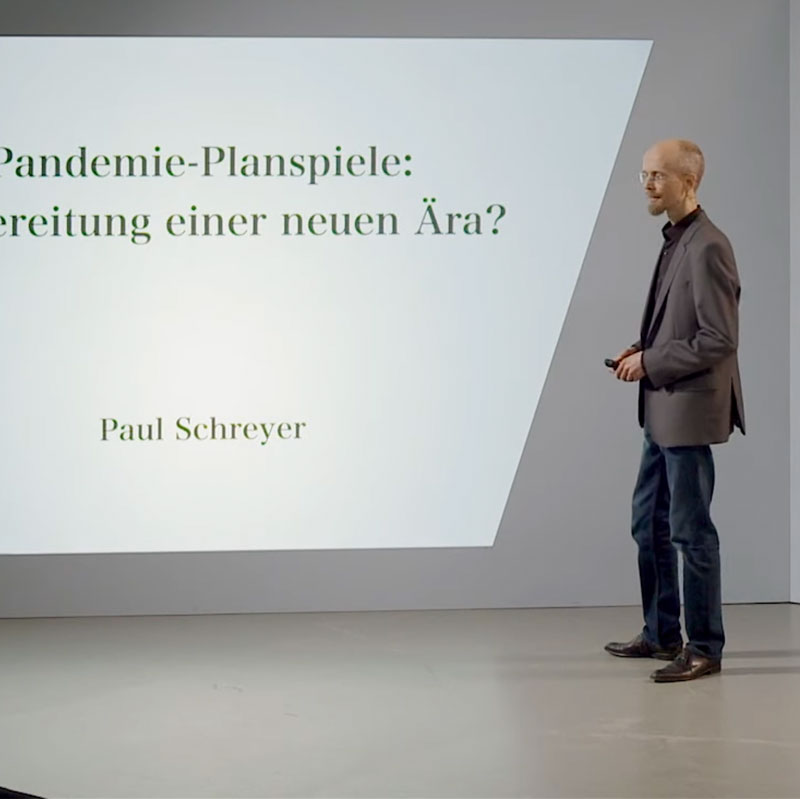 Political decisions during the Corona crisis did not come out of the blue. The „war on viruses“ began back in the 1990s as the „war on bioterror.“ Research shows: For more than twenty years since then, pandemic scenarios have been repeatedly rehearsed in simulation exercises, first in the U.S., later coordinated internationally. The titles of these exercises are reminiscent of Hollywood productions: „Dark Winter“ (2001), „Global Mercury“ (2003), „Atlantic Storm“ (2005) or „Clade X“ (2018). High-ranking government representatives as well as well-known journalists were involved, most recently, at „Event 201“ in October 2019, also board members of large global corporations. After the World Health Organization (WHO) declared a coronavirus pandemic in 2020, many of the measures that had been rehearsed and discussed for years were implemented globally.
Passages like the following appeared in scripts as early as 20 years ago: „The sight of an armed military presence in US cities has provoked protests about curtailment of civil liberties (…) The question is, however, how do we enforce it and to what degree? How much force do you use to keep people in their homes?“ In the event of a pandemic, „basic civil liberties such as freedom of assembly or travel“ could no longer „taken for granted“. Restrictions on liberty, as well as mass vaccinations, were regular features of the planning games.
This lecture will chronologically trace how these exercises came about, who organized them, and what parallels the scripts have to the current situation. Is the virus just a pretext for a longer-planned global transformation? And was a severe stock market quake in September 2019 perhaps the real trigger for the global lockdown?
The lecture was recorded on 20.11.2020 in Berlin.
+++
The book „Chronik einer angekündigten Krise“ by Paul Schreyer is recommended in this context.